After exiting the shuttle bus, Oscar ran, dragging us on his leash, to the Disney Kennel Club. He seems very excited to be able to get some sleep after staying up all night guarding us. And Pooping.

We’ve been surprised how much the food in Disneyland has improved. It’s the same price, or in some cases cheaper than the food in our hotel, and very good quality. we had breakfast at the big outdoor cafe in Tomorrowland; very fresh fruit, breakfast burrito, coffee, and yogurt. After that I hopped in line for the Finding Nemo Submarines while Yulia and Sasha ran to the restrooms to clean up. In front of me in line were parents with a set of twins, maybe 5 years old, both done up in very elaborate princess costumes. It was already getting hot, so I couldn’t imagine that the girls were comfortable. They were whining and crying quite a bit, so I was probably right.

For parents of twins they were pretty ill prepared as well. Their stroller was too large to fit in the line properly, had no sun shade, and  they were already out of baby wipes. I was able to help with the last one, by giving them a hand cleaning wipe that I took the day before from one of the restaurants in Disneyland. I usually grab a handful of them when I see them, a they come in particularly useful at times. Times like two crying girls covered in ice cream in front of you in line. The parents marveled in my preparedness, and after allowing them to bask in the glory of my ability to remember a moistened towelette, Yulia and Sasha came back, allowing me to run and get a fastpass from Space Mountain.

The Nemo line was really big, since it just opened, it was really popular, and I have to admit that it was really cute and done well. After that we ran to use our fastpasses at Space Mountain, where we got line-jumped by a family who didn’t know how fastpasses worked and tried to use passes that they just pulled from the machine. I hate stupid people, but stupid people who get in my way just make it worse. the guy at the top of the line tried arguing with them for a bit, but they were holding everyone up, so he let them through. Bastards. 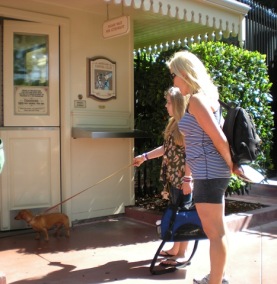 We headed to Star Tours next, and this was the first time that they opened up the queue area that I can remember. Instead of just lining up outside there was a small maze-area that was self enclosed in the building near the entrance. It seemed odd until I realized that it was probably the disembarking point for the old Journey Through Innerspace ride that used to be where Star Tours is now. The unused Peoplemover tracks ran right above where the cars for the old ride would have ran. Kind of fascinating how architecture gets recycled.

We wandered around up to Toontown, rode the coaster there, but the heat was getting oppressive. It was hard to wait in lines when it is this hot. It was also getting close to lunch, so we went to the kennel to walk Oscar, and figure out lunch. Oscar was happy to see us, but refused to use the bathroom while we were walking him. Once he got hot he dragged us back to his cage to cool off, and we headed to California Adventure, since we can get food and drinks there. A couple of margaritas would hit the spot.

The Pacific Wharf section has a pretty good Mexican restaurant with lots of shade, right next to the Margarita stand. Location. Location. Location. Funny how the Mexican food in the park is mediocre by California standards, but would be the best Mexican food in Seattle. It was really good on the hot day. We just sacked out in the shade for a while, then took a tour of the Tortilla factory there. Free, hot tortillas. MMM.

We hid from the heat for quite a while, and headed back into Disneyland, checking the lines at the River ride and Soaring as we went. Lines were really long still, both parks were crazy busy because of the 4th of July. That was fine, we have a full week, so there is lots of time to get rides in. We went up to the train station in Disney and took a full loop tour to cool off. That was a great plan, as people started leaving the park, or at least the rides to catch some food before staking out spots to watch the fireworks. Some folks were already sitting and waiting. Wild.

We hit the Jungle Cruise, which further cooled us down, and then went into the castle area to go play on the dark kids rides. Snow White, Mr. Toad, and Pinocchio. More great rides to cool down on, and really fun if you haven’t been on them in a while. The artistry that you see in these older rides is just fantastic, and definitely part of the fun of the park.

Lines were picking up and clogging the rides again, so we headed out of the park , grabbed Oscar, and went into Downtown Disney to the La Brea Express for dinner. They have a full restaurant, but we wanted something a little less formal, so we went with the dog to their side porch and ate and drank wine. It was cheap, had a great view of the fat people riding those mobile scooters into the park, and was in the shade. Perfect to rest, but the heat was making everything more difficult. After an hour or so, we went back into the park to catch a few final rides, and to find a place to watch the shows and fireworks. 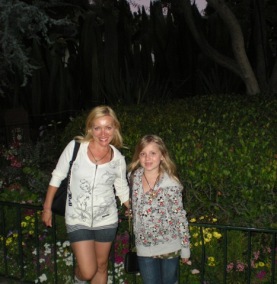 We headed over to Matterhorn, which had a pretty short line. Turns out the line was short because the ride was stopped. We waited anyway, and after a few minutes one of the sleds came down and the people left. A few minutes more and a few security people showed up, and the last sled came down. They escorted one guy out of the front of the car, and began talking with him. Another security guy started talking to the obviously angry Family from the back. They had a 6 year old girl in a princess dress who was pretty scared. We could overhear that they were stuck there for over 20 minutes, and were furious. Apparently the guy in front pulled his feet up and out of the sled to impress his girlfriend, and this was caught and the e-stopped the ride. The security guy gave the family a set of pins that apparently gave the the Disney Carte Blanche, and an escort to their next rides to boot. I asked the cast member what went on afterwards, and he said the guy didn’t get kicked out of the park, since he owned up and admitted his mistake and apologized.

Note to self: Don’t do that.

We found a nice location at one of the restaurants to watch Fantasmic, and then see the 4th of July fireworks. Both shows were great, but once they were done we were beat. We fought the crowds out, and walked back to the hotel with Oscar. The shuttles were so insane that walking was faster.

Exhausting, but a great day.