We found a nice Kennel to babysit Oscar for the day, which was perfect. We made plans to go to Six Flags park, and the other option was for one of us to go half day, and then swap. This let Oscar spend the day out of the heat, which ended up being better than we fared. It was early, but already hot.

Six Flags was pretty darn cool. They had a great collection of Roller Coasters, and a good animal park to boot. Yulia went on her first upside-down rollercoaster, and had fun but was pretty shaken up. I love these, but went on the V2, and got pretty shaken up from that one. None of us tried their roughest coaster, since a brain hemorrhage tends to put a damper on the day. We all loved the Tony hawk coaster, but were disappointed that the big wooden rollercoaster was down for maintenance. We were having fun, but it was getting hot fast.

We grabbed lunch, Crepes! We were amazed to find crepes in the park. They were great. It was almost to hot to eat them, since no matter how long we waited, they never cooled down. The same stand had a machine that made those little fresh donuts. So good. We hid in the darkest part of the shade we could find but were sweating bullets. Time for the River raft ride.

Apparently the river raft is fed with fresh glacial melt, because we went from boiling hot to freezing in nothing flat. It was almost too much, but we needed it. We went around the rest of the park, where Sasha got a chance to ride an elephant, we saw all the various 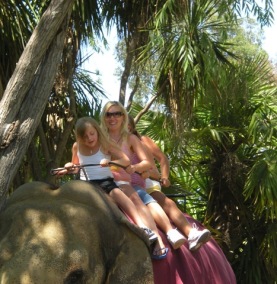 animals, and caught one last roller coaster. We only lasted to 4:30 before the heat finally did us in. We took the tram back to the car, and once we actually found the car by wandering back and forth while hitting the Panic button on the remote, the honking of the car helped us find it.

Thinking ahead, we left water in the car so we would have something to drink when we got there. Not thinking ahead, it was 101 degrees in the car, so the water was hot enough to use to make tea. No refreshment there. We headed straight back to get Oscar.

He seemed happy to see us, but was a little nervous around all the bigger dogs in their cages. We headed for downtown looking for somewhere to eat, and saw an outlet mall on the way. I was happy, since I hoped that I could find some swim trunks there, since today was definitely a pool day. We all picked up some stuff, I got some trunks, but we were dying just walking to and from the car. We drove to the river to find a place to eat, but it was hotter than we could enjoy anywhere.

We settled on going to the grocery store, and getting some food to eat at the pool. This was the best we could do to beat the heat. Sasha ran to the pool back at the hotel and never left. Even I liked it, and I’m just not a big water guy. But with this kind of heat, you just gotta find a way to cool off. Once the sun went down, the pool attendant built a fire in the fire pit, and we roasted marshmallows. S’mores are always a hit. But do you serve them with red or white wine?