We were up early to get a cab over to the bus stop for our ride up to Manhattan. We didn’t trust the local trains to get us in, after the delays we saw the day before, so a cab made sense. I wasn’t sure how to pick one up, since we were in the suburbs, so my Aunt dialed up the local agency and had one all set to get us in the morning. We had everything packed, and were waiting outside when the cab drove right past the house, slammed his brakes, reversed into traffic, then pulled into the drive.

Part of the reason why companies like Uber are making it big is because there is a belief that cabs have become just an awful service. This cab is what they are talking about.

The car stopped in the drive, dented and smoking. Some kind of former police car that looked like it was previously destroyed on the set of the Blues Brothers, then painted white and a cab number drawn on the side with a Sharpie. The cabbie got out, belly hanging out from the bottom of his dirty shirt, and he popped open the trunk. It was filthy, and had oil cans, tools, a spare tire, and other shit strewn about. Apparently, he had been kind enough to remove the dead body from the last fare, so there was actually enough room for our bags.

I got in back with Yulia and Sasha, as the front seat was also filled with crap. There were no belts. Chunks of the dashboard were missing. A large yellow Nylon strap wrapped around the upper part of the driver’s seat, and went forward to some exposed member of the dashboard assembly to keep the seat from collapsing backwards. It was good to know that I would be close to my family when we were horribly killed.

We flew out of the drive and down the road, apparently our cabbie still had both of his Autotopia tickets remaining from Philadelphia Drivers training, as he just didn’t even pretend to give a shit about lights, lanes, or pedestrians. It was epic. And he gave us a running commentary along the drive.

“You know what the problem is, Polite Drivers! If everyone just drove things would work themselves out.”

“See this Park, it’s filled with homeless people. They gotta live somewhere and this is like camping”

“Hey check this underpass – that Homeless guy built out some kind of castle from this place. Amazing!”

For no apparent reason we did not die, and I gave the driver a reasonable tip when he dropped us off for choosing a different family as his next victim. We rubbed the lotion on our skin and put it in the basket.

The bus looked to be a better experience. We had to wait out in the heat for a bit until there were ready to load, but once we were on it was actually clean, had power and Wifi, and most importantly, AC. It was a short 2 hour drive to NY. The BoltBus looked to be a good travel experiment. We had originally planned to take the train between cities, but the train was literally 10 times more expensive, so we just couldn’t justify it.

The driver had just closed the doors when our departure time came, when someone pounded on the door.

“Is this the BigBus to New York?” the man was asking in a bit of a panic. BigBus was another bus line, they were behind us and had left a few minutes earlier.

“No, this is Bolt Bus. It is written on the side.” The driver’s Jamacian accent was thick, but you could pick the sarcasm right out.

“Are you going to New York?”

“Wait for me – I have my wife, and we have some luggage…” and the man ran off.

The driver closed the door and drove away. Looking back, the man appeared sad and confused as his wife beat him. Lessons learned:

So we rolled up the highway. Yulia and Sasha picked much larger seats than I did, as I figured out too late, but that was ok. I was still able to lean back a bit and watch “Bullitt” on my tablet. The trip rolled by fast, we had nice views of the state as we drove, but that State was New Jersey, so it was pretty much alternating views of shitty housing and tire fires.

Without warning, (aside from a big highway sign saying “Manhattan”), we could see Manhattan! The profile of the city was impressive, but fleeting as we turned down the road into the Lincoln Tunnel almost as soon as we could see the city. The ride through the tunnel was quick, and we were in New York! It was construction and garbage piles as far as the eye could see, which was about two blocks.

We were let out somewhere near Penn Station, and it was hot as hell out. We had the address for the hotel, so the logical thing to do was call a cab. With the experience in Philly, we were nervous, but had to give the cab another shot. I stepped out and waived, and within around 5 seconds a cab pulled over. I was in shock. The car was fairly new with a clean yellow paint job. The fine young man of indeterminate ethnic descent came out and helped us load out bags in. The interior of the cab had the standard New York clear screen between the front and back seats, but I still sat in front as the whole thing was clean. It was shocking. New York cabs were supposed to suck. I can only assume that the Philly cab used up all our sucky cab Karma for a while. We gave the cabbie the address to the Element Hotel in the Garment District.

Driving in Manhattan is apparently different that Philly. While lanes, lights speed limits remain fully optional, there is a new added pedestrian element, where people randomly jump into the crosswalk, or for bonus points, simply near the crosswalk, and cross the street against the light without regard to the light, but also without looking like they are rushing across. People swarm in the hundreds out around the cars, trapping them halfway into the sidewalk, traffic gets blocked in the opposite direction until the car sneaks through he crowd, then driving at breakneck speeds to the next crossing, where it starts again.

This continued until we got to a street filled with scaffolding and trash bags, and our driver stopped. I wasn’t sure if this was supposed to be better than the previous street filled with scaffolding and trash bags, but it seemed to be the right place. We got our bags and paid the guy, and walked up a bit to the hotel. Directly in front of the Hotel, everything was perfectly clean. We went in and it was a really nice place. The Element bills itself as a Eco-friendly hotel, with super clean everything and who the fuck knows. I didn’t really care, we were close to Times Square, and the place had really high user ratings.

We got to the room, and it was small, but very clean. We had a great view out across New York, and immediately decided to head out and see the city. It was a short walk over to Times Square, and once we were off our street, it was the complete Bright Lights, Big City experience. We had huge flashing billboards for shows all around us, Theatres for major shows, restaurants, shops, the works. It was amazing. 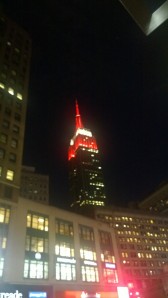 After walking a while, we acted like real tourists and had dinner at the Hard Rock café. This was built into the old Paramount Theater, where the Beatles played a gig, and they had a great Beatles exhibit. It was one of the bigger Hard Rocks that I have seen, and it was some really cool stuff. Sasha was in Heaven. We were also surprised as the food was way better than expected. After a hungry day on the bus, it was welcome as well.

With some food down and a serious review and sampling of the drink menu, we went back out and saw more of the lights. The later it got, the busier that the city became. It was apparent that the phrase “the city that never sleeps” wasn’t just a saying. We kept walking, and got bearings on the TKTS booth for Broadway tickets, more stores and restaurants, and ended the evening with a great nighttime view of the Empire State Building.