It was getting hot again. The rain was pretty short at night, and didn’t cool things much. We got up and the streets were dry, and getting warm early. We took the Metro into town, our first planned stop was the Air and Space Museum. As soon as we got out of the metro in downtown, it was hot. We had to be careful today.

Air and Space is the Smithsonian museum that you always hear about. The place is huge and has everything that a nerd could love. I was a bit worried about boring Yulia too much, so I tried to dial my nerd index back a bit. Mostly I failed and ran around flapping my arms like Kermit the Frog. I also had to explain a few times that these weren’t models of famous aircraft, these were the real thing (or test units that were never flown). Then more arm flapping.

My big favorites were:

But really everything was amazing. We walked through all the exhibits, but didn’t pay to do the extra interactive movies or things, that was too much time for us. We were getting hungry and wanted to find some lunch. The food court at Air and Space looked like fast food, so we walked toward the Smithsonian Castle to see what was there. It was a hot walk. By luck, they had a small but nice cafeteria and we grabbed lunch and ate in the first building of the Smithsonian Institution. It was being renovated, and they found some nice mosaics under the modern flooring, which were being restored. The food was pretty good, and I picked up extra water while we were there, and some kind of Brawndo (it has electrolytes!) as well.

We exited out the back, past a massive Lego replica of the Castle, and walked through an Asian art exhibit in the building directly behind. It was good, but the Seattle Asian Art Museum is better (in my opinion). This dropped us back onto the mall, in the shade, but hot. Our next plan was to go look at the Washington Monument and Lincoln Memorial, but we weren’t going to make it in this heat. up ahead I saw one of the Citibike rental stations. Now *that* looked like a plan.

We had been talking about renting bikes for most of our trip, but it didn’t work out in central park, but these were what we really wanted. The rack was mostly empty, but there were four bikes remaining. We needed three. In our way were a very nice Asian family who were trying to make a decision on whether to rent or not. I walked up behind them, and they asked me how the system worked, and if they had to return the bikes here. I politely showed them the system, and pointed out the system map adjoining the pay station that showed the various drop off points around DC, mostly next to Metro stations. They smiled and thanked me, then walked away to go examine the system map.

I promptly rented the three bikes we needed, totally screwing them over. Sorry about that. 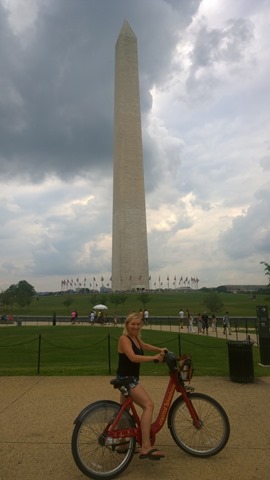 The bikes were great, it took a bit to get them adjusted, but soon we were off, cruising down the Mall. We had little bells that we ran as we passed people to pretend we were being polite, but mostly because it is fun to bike around ringing little bells. Even with the effort of biking it is so much cooler to bike in the heat, the wind cools you right down, so we felt great, We were at the Washington Monument in no time. I pointed out the change in color (that everyone points out) that happened because of the Civil War. (they changed quarries). We weaved around people and kept going towards the reflecting pond.

We hit the World War II memorial first, and walked our bikes in. It was a very grand memorial, straddling the reflecting pond, with pillars for each state and territory and an arch on each side for the Atlantic and Pacific. It is moving, and in many ways exactly what you expect when you see a war memorial. We left and biked down the pond, up the the Vietnam Memorial. Yulia and Sasha had never seen it. I saw it when I was a child. It is a large, black scar, with the names of lost Americans across the stone. I remember it as being very controversial when it was built, but you can’t argue that it doesn’t move you. It is truly amazing. Flags and flowers were left by those who visited lost ones. Someone left a six pack of beer for his fallen comrade. That almost broke me up.  We took some time there before moving on.

We went to the Lincoln Memorial next. I watched the bikes while the girls went up first.  I’m glad we brought extra water, it was boiling out in the sun. The view from the steps of the memorial was so familiar, it was in every movie and speech that i had seen, but it was still amazing to see in real life. When the girls came back down, i had a chance to go up to the memorial.

It is a beautiful memorial. Lincoln seated, the speeches on the wall. You look out he columns and and feel the city flowing in around you. Originally, this was going to be our last stop. But it was so quick and easy to get around on the bikes, that I looked at the map to see what else we could get in.

We continued around to the Korean War Memorial. Like the Vietnam memorial, it was moving, and a bit abstract, showing a group of mixed men moving forward. It noted the multinational force that fought. We continued on to the Martin Luther King memorial, where Dr. King emerges from a mountain surrounded by his own quotes. He directly faces the Jefferson Memorial. Jefferson owned slaves, yet spoke against slavery. a fitting dichotomy. Further down, we walked our bikes through the FDR memorial.

As an unabashed liberal, I have a deep respect for FDR. He took risks to recover America that few at the time were wiling to do. Overcame a deep personal handicap, that he refused to show (for better or worse). He led America through World War II, and worked to setup the United Nations to prevent further wars. He was far from a perfect president, or person, but he always had his heart in the right place and work for what he believed in.

We finished our tour by going to the Jefferson Memorial. You could see the rest of the city from here, over the Tidal Basin, It was beautiful. We stayed for a bit, then bicycled back up the shore, onto the mall, then back to the Smithsonian Station bicycle drop. We returned the bikes there. The metro station was overcrowded sure to a breakdown, so we walked a few blocks back to our main station to return to the hotel.

We went back to Old Town Alexandria fro dinner, to a top rated Blues Restaurant. They had some great southern food. I had an amazing Catfish, we tried Hush Puppies, local beer, Salmon, and a few other dishes. It was great food, we ate too much, and a good end to the District of Columbia.