We drove out of Alexandria in the morning. It is pretty nice to be able to rent a one-way car to get around. But I have done this so often now that I am pretty sure I am on some Terrorist Asshole Watch List or something. That’s the way it goes. We had planned on several extra nights in Philadelphia at the end of our trip in our original planning, but since the family was gone, we thought we would make a third stop somewhere instead. The question was really, where to go? We thought about the ocean shore perhaps Atlantic City or something, but nothing was appealing for the price. 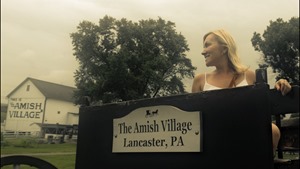 So we went to Amish Country.

We reserved a big room in a resort with a pool, bar, restaurant and figured we could relax for two days and see what was around. If nothing else, we could swim. one of the problems with this vacation was that in both Manhattan and DC, it was near impossible to find a hotel with a Bar and a pool that wasn’t in a crap area, or way too expensive. It made my writing harder as well, as usually Yulia and Sasha would swim while I would go to the bar and write. instead we were always around town, so we saw amazing things, but never relaxed much. This was our chance to relax and wind down for a few days, we hoped.

The drive up was easy, we went north through Baltimore, up the turnpike into central Pennsylvania, and found our hotel just outside Lancaster. It was perfect. the room was big, the pool and bar were just what we wanted, and it was in a quiet area. We actually had a King and Queen bed in the room. We gave Sasha the King bed, as it was in it’s own room, and she had a hideabed for the last leg in DC, and needed some teenage space. That and she literally ran into the room and called “dibs”. Gotta respect dibs.

We went to Lancaster for a late lunch. Lancaster is the oldest landlocked town I the US, apparently. It’s nice, but not particularly special. we walked around a while, checked out the historical market, and I used the Phone app again to find some food. We checked a few places out and settled on an Irish Pub near the town center. We sat in the shade on their deck. It was hot out, but much better than in Virginia. A couple of drinks helped, and good food helped more. I had a Sheppard’s Pie that was spot on, and Yulia had a crab dip and salad that was also quite good. We asked out waiter what the best ways to see the Amish and learn a bit were. He pointed out the biggest Amish towns on a map (being Intercourse and Bird-in-Hand), and also recommended a working farm that gives tours and history. The farm sounded like a great idea for the morning.

After the pub, we decided to drive out to Intercourse to at least take a look at the town, and see what was out there. The GPS pointed us out onto Highway 30, and we followed it west. interestingly, if we had headed east, and kept going, this would lead directly back to my Aunt and Uncle’s house, and into Downtown Philadelphia. Highway 30 is Lancaster Avenue in Philly. It is one of the oldest working highways in the US, and the main route for food coming from the farming towns into Philadelphia, at least back when the town was new.  But we headed west. After a bit we turned off 30 onto a local road. 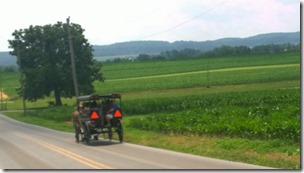 Once the road got a bit smaller, the strip malls and fast food faded away, and we saw the Amish buggies sharing the road. You could se the horse clopping along, the square black buggy behind it. Kids in their traditional dress in the back. The only thing out of place was the orange warning triangle, and electric turn signals and driving lamps on the side. I had heard that the lamps were needed now. Apparently there had been too many nighttime accidents. We weren’t sure how the electric signals fit in with the general anti-technology nature of the Amish, but that would make a good question for the farm tour tomorrow. We drove through the neighborhood, passing several markets, some local small stores, and stopped one we were in the town of Intercourse. It was a nice mix of Amish and “English” (the Amish reference for all non-Amish types). Both groups were working in the local shops together.

We walked through an amazing furniture shop. The local, hand made furniture was in several traditional styles, including a Mission style that was a dead-on match for our own furniture. Ours was made in a factory in Asia, and this was hand made by Amish and shakers. The price was the same as we paid. Crazy. I need to come out here with a U-haul. The local butcher had farm fresh everything, including Scrapple, a local dish which seemed to be some kind of liver and veggie sausage. Not too far off from Haggis. I probably would have liked it. Across from there was a local center with a series of small shops filled with local wares (but geared towards the tourists). The shops were shops. What was fascinating was watching the interaction of the locals (Amish and English) together.

We saw Amish girls on rollerblades heading home, and both men and boys on two-wheeled scooters zipping along. Only the tourists turned to look, this was normal here. We saw a local Amish teenage girl working an ice cream stand, who called out to an English teen boy in a pickup. wanting to know if he would be at the local such-and-such event this weekend. it was typical friendly teenage flirty behavior. we were actually surprised by that a bit. it was all so normal and comfortable. it was really relaxing. We were really looking forward to learning at the farm tour tomorrow. We were strangers in a strange land, but we wanted to become a bit more familiar.