I was up early.

I had packed a picnic basket the night before. It was actually, a basket, we had purchased it several years earlier, and was woven wicker with a nice set of glass glasses, plates and silverware. it had a plaid cloth interior. I had some seltzer, sausage and cheese, fruit, an energy drink, a veggie tray of some sort, and a bag of trail mix. I used a few bungee cords, and strapped this to the luggage rack on the boot lid of my Triumph Spitfire. 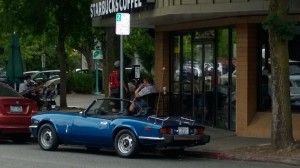 Starting a British car is a ritual. You begin with the choke in. (note: if you are young, the choke is a knob on the dash of your car that you pull in or out to give your carburettor extra gas when you start it.) (Second note: if you are young, a carburettor is a fiddly little device that controls the gas and air mixture of your car (in place of the fancy computer systems of a modern car) ) You turn the key, and let the engine crank a few times, just to get the oil flowing. Then you press the gas, and pull the choke out. You turn the key again, and after a few sputters, the engine springs to life with a symphony of noise and oil smoke. now starts a ballet of fluttering the gas pedal, adjusting the degree of choke on the choke knob, until the engine gets warm enough to start running smoothly on its own. It takes practice.

It also tends to wake up your wife who was trying to sleep in.  It is noisy, smelly, and wonderful. Today, I was going to the British Car Show.

Check in ran from 8am to 11. if you wanted a good spot, it paid to be early. The early hours were also when you would get to send some time with the locals and club members you knew before the main public got in.

I set my stereo to the disk of British music that I kept in it, and headed out. The show wasn’t too far away from my house. That was pretty lucky, as this was a big show, and brought people all the way from Vancouver, CA normally, and this year even had someone who drove from New York to attend. It was around 450 cars in attendance. For me it was just a drive around the lake. From my house to Kirkland was the normal street drive, but outside of Kirkland as I headed north around the lake, the drive was much nicer.  I turned onto Juanita Drive, a winding wooded road around the north end of Lake  Washington, and was soon followed by a Jaguar X-Type and an MGB, We were winding through the narrow, tree-lined road towards the park where the meet was.

It was beautiful. Cool air flowed through the trees. it was going to be a hot day, and even early in the morning it was warm, but with the shade and lake air it made a perfect drive in. The Spitfire was cruising wonderfully, and I would have been happier to drive much further. but I was there quick, and waited in the queue to get my spot. I had hoped to pick a place in the shade, but the meet was much more organized this year and I was corralled to the proper area, which unfortunately was in the direct sun and near the toilets. Bugger.

It was still a nice place, and I chatted up some of the Triumph folks I knew, and waited for the rest of my family to arrive. Yulia and Sasha were coming with more food, out wiener dog, Oscar, and some wine. My Dad and stepmom were also coming this year, and they were bringing their Delorean. Most people don’t know that the Delorean is a British car, but they were made in Northern Ireland. the company itself was killed due to the political machinations of Margaret Thatcher, who should be noted, is an epic fucking cunt. (Side note: this may seem offensive to some, as it is not polite to compare a cunt to Margaret Thatcher. I apologize to any cunts so offended.)

Traffic got bad heading into the park, and my dad arrived just in time to get a far spot in his appropriate section. Yulia and Sasha took even longer, as the lines to get in stretched out. It was hot by the time they arrived, and I left my car in the open heat, and took my food to a shady bench closer to the Delorean. It was  a good call. Yulia, Sasha, and Oscar arrived overheated, and we just hid in the shade.

It turned into a wonderful family picnic.

We sat, ate, and drank wine. We watched people look over the Delorean. Unlike most Deloreans at car shows, this was not decked out as a “Back To The Future” time machine. This car was stock. And it was all the more amazing for that. People loved it. Everyone wanted to get a picture next to it. We let some nice folks and kids sit inside to get photos, and they were thrilled.

Once we cooled down, we walked though the cars in the show. There were some beautiful cars there. Both my dad and I are big Lotus and Aston Martin fans, as he had both of those when I was a kid. Sasha loved the Land Rovers decked out for African Safari, and Yulia loved the Jaguars. The old, racing Bentleys were amazing. And the cars just went on and on.

Once we heated up, we headed back to our shade again and relaxed.

Part of the value of owning a classic car is sharing the experience with other fans of classic cars. When you go to a he show like this, it is even more intense. In a good way. everyone around you has a love for their car. it isn’t rational, but it is shared. Each car in the show is an extension of the owner’s passion. Some have restoration journals, others are decked out for rally or safari. Some have British regalia, and almost every classic Rolls Royce has a jar of Grey Poupon mustard somewhere.

These cars are about the journey, not the destination. And many times the journey is an emotional  or nostalgic one.

Eventually the show ended. We said goodbye to my dad. Yulia and Sasha left, and I took Oscar with me. We fired up and cruised back along the shady road, waving to other classic cars as they headed back to their homes and storage. The air was hot, but cruising along cooled everything off again.

Once home, I pulled the Spitfire into its place in the garage. Oscar was curled up in the seat. I shut the engine down with a clatter, then silence. Just the tick, tick, tick of hot metal cooling and contracting as the car came to rest.

We might need to go out a few more times than normal this year.