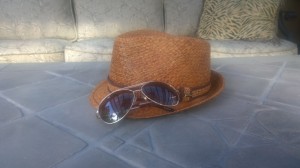 It’s good to have a long weekend to spend in the heat. While we are in California, Seattle is being hit with a cold snap and snow. We really aren’t sorry to miss that. Good thing we left Oscar with his wiener dog coat at the dog sitters.

We hit the Zoo here, called “The Living Desert”. It’s pretty slick, and has a great collection of desert animals and gardens. Sasha was thrilled to go with Yulia to ride on a camel. It’s not something you see all the time. We then went over to the Giraffe station, where it was feeding time. The zoo had just added a new station where you could pay and you could get to directly feed the giraffes. I have to say, Giraffes are big. You look at them from a distance, and they seem pretty tall, but just the head up close is HUGE. If these things were meat eaters you would se them running people down and snatching babies out of carriages with their prehensile tongues. Goddamn terrifying. We managed to catch the Jaguars waking up from a nap. As always, big cats at just like little cats, except they can kill you. Although I should note, that our cat tries her best to kill us, so we keep her small.

Mexican food here is great. We hit a great restaurant on the main drag in downtown Palm Springs. It takes up almost the whole block. Even then, it was still a wait to get in, but well worth it. I had a spicy pork and a side of chunky guacamole, washed down with a large margarita. We also hit a small family taco joint and I had to keep myself from eating tacos non-stop. We have a little family Mexican joint near our house in Redmond, and you can always tell the differences in the family recipes , with homemade sauces and specials. It just doesn’t compare with chain food of any kind.

My dad’s house is pretty close to Shields, the original family date farm out in the valley, but we actually hit the Saturday market, and found great dates from a smaller grower. They were fantastic, dried just right, still plump with a little bit of white starting to form on the skin. We must have bought 5 pounds. I love dates.

Over in Palm Desert we hit Paseo, the fancy shopping strip. It’s a cool walk, lots of fancy cars to see, some neat shops. Lululemon actually had a sale rack, and the girls found some great stuff there, and I hit Tommy Bahama. Every year I’m on some mailing list and get  $50 gift card from Tommy Bahama, I’m not sure why. I actually remembered to put it in my wallet this time, so I poked around the store to see what looked good. I was lucky to find a nice straw fedora, actually in my size. I had a great Straw hat from Tommy a few years ago. Nice weave, wide brim, and I wore that hat until it literally fell apart. I haven’t seen that style at any of their stores again. For some reason, most of the hats seem to have a cowboy flavor now. Must be the new style. This fedora isn’t too hipster, has a good weave, and fit. So I was pretty pleased to get a new hat after all this time.

This morning, we took a trip out to the Salton Sea. The Salton Sea used to be one of the top inland sea resorts during the 50’s and 60’s. But the waters increased in salinity from runoff and natural reasons (the lake had no flow through, being created by accident in a river flood around 1900). And today the resorts are gone, the lake is a dead sea, with beaches covered in dried fish and a very interesting smell. The desert is a harsh mistress, and it takes little time for abandoned buildings to disappear back into the sand. The concrete shells remain, empty streets circle sandy lots,  most everything else is gone.  The old marina house has been rebuilt into a community center. But there really isn’t much community. It stands out of place, almost out of time.

The rest of out time is resting. Sitting by the pool and fire pit. Some beer, some wine. Some football.