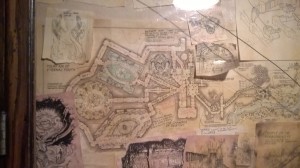 After years of travelling to Disney, we have come to the conclusion that the mid-day at Disney is just not worth it. As such, we skipped it this trip. On our New year’s trip this year, we stayed at a nearby hotel (Annabel Hotel), but still a fair walking distance. We were going to stay at the Disneyland Hotel, but decided to try the Grand Californian as a test. Being so close meant that our room was literally as close to the park as some of the rides. There was not reason not to stop back in the room, or swing by the pool, so that’s what we did.

We hit the park early each day. Right at opening, or taking advantage of the “Early Hour”. We found that at opening, the parks were really empty, and didn’t start to really fill up until around 11:30. At that point, we started working our way back to the hotel, usually hitting the pool by 12:30 or so (sneaking in an extra ride on the way back). We didn’t return until 4:30 or 5pm. Once the parades started, that took people away from rides and the lines were ok again. The later we stayed, the better the lines were.

Naturally, we hit all our big favorites, Pirates of the Caribbean, Indiana Jones, Haunted Mansion. For whatever reason, this trip Yulia started really liking the stronger rides. She’s never been a big Roller Coaster person, but she got really excited for Space Mountain, and Matterhorn, and we even got her to try California Screamin’ (in her case, this was aptly named).  She went on The Tower of Terror as well. A small amount of screaming may have happened there as well. I’m not sure why she suddenly started enjoying these types of rides, but we all had fun.

The weather was hot, so that made spending the afternoons resting or in the pool make even more sense. There’s actually a lot of shade in the Disney parks, but you cook out in the heat, and it just stops being fun pretty quick.

We even took time out to go to Tom Sawyer’s island, which is now “Pirates Lair” because America is full of Illiterate motherfuckers. That had more shade, and tunnels that Yulia and Sasha used to see if they could get me stuck or hit my head. (Final Score: Fake Rock – 6, Mark – 0).

On one of the days we tried for a dinner at our favorite place, the Golden Vine Winery, but by the time we had walked there the place was booked. The checking desk called around, and found that there was some space over at the new Carthay Circle. This was part of the remodel of the front of California adventure, (the whole remodel they did turned out great) and was designed after the theater where Snow White was played the first time. We had been to the bar there, but never the full restaurant. We ran over, and after a short wait, were taken to a table.

This wasn’t a regular park restaurant, this was really, really nice. There were  a few small special occasion rooms off the main room, and there were quite a few folks (not everyone) who were actually dressed for dinner. They had a very good wine selection, and from the menu we could see that this appeared to be an attempt at real fine dining. Our server confirmed this when we talked with her. This was a bit of an experiment, and the park wanted to see if some real upscale food would work in the park. We took her recommendation for wine, which was surprisingly good as it was Californian (usually too hot) and from the winery belonging to a Disney director. The food was all top-notch, if not a bit over spiced, like they were trying just a bit too hard. We were pleased in any case, and I’m glad to see Disney keep trying with the food in the parks. It has made a huge jump in quality over the years, and I’d rather they try too hard and learn than go back to hotdogs and nachos.

For our last night, we came back to the park extra late to catch two shows: The new Electric Parade, and the Main Fireworks.

I have always loved the Electric Parade. The original show was from the 70’s, and I remember seeing it as a kid with my grandparents. It went away for a long time, then about 10 years ago, it came back for a while. But it was the same show. it was cool, but the music and floats were a bit dated. Light bulb dresses on the princesses. Weird electronica music. A float for the movie Pete’s Dragon. (if you don’t remember Pete’s Dragon, then you are just like 90% of the visitors who kept asking “who the hell is the kid on the dragon?”) Shortly after we saw it with Sasha, they stopped the parade again.

They have a new electric parade now, and we were excited to see what changed. As it turned out, everything. Every float was new, from all the new rides and cartoons. much more advanced and larger as well. All new music, but I could hear that they sampled the music of the original parade in some sections. It was a nice callout to the old parade. Towards the end of the parade, I recognized just a few of the old floats that they snuck in, a callout to those of us who remember the old parade. We loved it.

Once the parade passed, we were told to move into Main street to watch the fireworks. This year is the 60th anniversary of Disneyland, so they had a bunch of “Diamond” things about, and the Fireworks show also got a special treatment. When the show started, Lights went down all along Main Street. Then once the first few displays went off, projected lighting lit up the Castle, and main street. Scenes to match the theme and music were projected, chimney sweeps danced for Mary Poppins, fake Snowflakes fell from the sky for Frozen, Finding Nemo had a giant Nemo fly past the Castle, all while the Fireworks grew bigger and bigger. The whole show was bigger end wilder effects before a huge fireworks finale. It really was the best display we had ever seen. We were literally stunned. When it finished, we cheered with the whole crowd for a while, before people started heading out. We moved back into the park to get in just a few last rides before it all closed.

We ended up leaving right at midnight, when the park closed. It was nice to have a short walk back to the room.