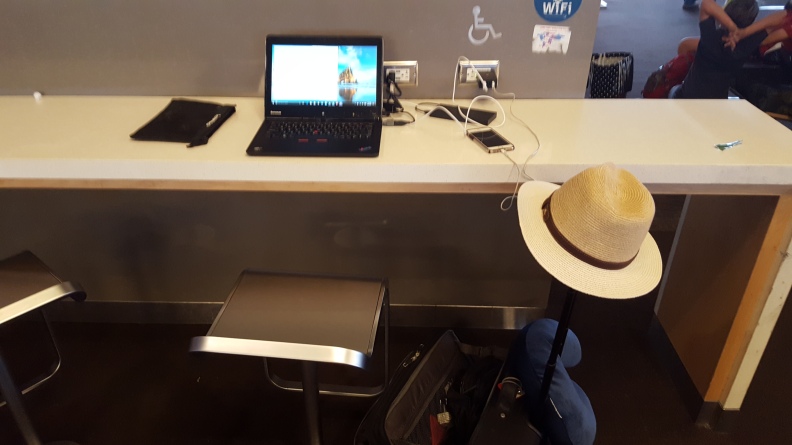 We are back at the airport. We are taking vacation this year in Paris and Barcelona. We made these plans around six months ago, when we were in the middle of a really nasty winter, and nothing was going on. Sasha’s off to college next year, so this is a bigger vacation than normal. Fly to Paris, stay a while, train to Barcelona, stay some more, then back to Paris for a couple of days and go. Since nothing else was going on it made sense to plan a big trip.

Since then we had Yulia’s Mom stay with us for two months, hosted three gymnastic meets, and since that wasn’t enough, we bought a new house and sold our old one. Yeah, we weren’t busy at all. The purchase of our old house is actually closing as we sit in the airport. We might have cut things a little tight.

We moved into our new house last week. normally we pack for a trip several weeks ahead, but we’ve been so busy unpacking boxes we had not time. We threw everything together last night, dropped off Oscar the Wiener Dog, and got one of Yulia’s gymnasts to watch the cats. It will be great to return from vacation to a new house, but at this point, we feel lucky to have got everything done in time. It’s a lot more complex buying a house than it used to be, and I spent over a month assembling PDF copies of every scrap of banking paper we have touched for the last year. It all worked out, but I am glad to be done with everything.

We packed a lot less this trip, partially because it was all at the last minute, but also because we will be taking a train in the middle of the trip, and we need to cram all our bags into taxis and trains and the metro. I actually bought a bunch of travel clothing for a planned trip to India for work, but that never happened. The clothes came in handy now. It all packs really small, and I bought packing cubes to go along with everything. If I didn’t need my computer, I could have put 2 weeks of clothing into a single bag. Yulia went the disposable clothing route. She packed older clothes that she plans to throw out, and will replace that with shopping in Paris for some nice things. Sasha just got back from Paradisio, which is a muti-day music festival out in the Columbia Gorge. With the heat and filth I’m pretty sure the tagline was “Three Days of Dysentery and Music”. She packed everything in the middle of the night, and is asleep on a chair here. I have no idea what is in her bag, and I’m pretty sure that she doesn’t know either. If one of the cats jump out, I will fail to be surprised.

As we were packing the house, we came across the picture book from our previous trip to France in 2007. That was also right after we moved. Not a planned coincidence. The book had an envelope in if that had the postmark of the Eiffel Tower post office. If you didn’t know, the Eiffel Tower has it’s own post office, and special post mark. They sell envelopes and stamps there so you can send letters with a unique postmark. We mailed ourselves, but never actually opened the envelope. Neither of us remembered what was in it. We cut the envelope open, and a scrap of paper fell out. It had a hand written note:

“Go back to Paris”