We weren’t sure of the best way to visit Tijuana. We decided on parking at the border lot and walking. We heard it could get crowded, and that it can be better to take the trolley down, but it was Monday so we thought it wouldn’t be too busy. We were right.

It’s been a long time since I’ve been in TJ. I knew the general crossing where you go, and that you turn at the Plaza from there to head to Avenida Revolucion. After that, avoid anywhere that doesn’t have windows that you can see into.

We actually brought our passports. We all have the updated Driver Licenses that are good for ground entry into Canada and Mexico, but I read that recently it had been a good idea to make sure to have the passport just in case. The whole passport control center was new. I knew this as I remembered that the previous control was basically a turnstile going into Mexico. This was full passport control, we all actually got Mexico stamps in our passports. That’s really cool.

We walked through the border crossing and out onto the street. I recognized nothing. I usually can’t remember where I parked the car, but I have an amazing recognition of places and location. This was off by a lot. We walked out of the crossing and went passed a taxi stand. Across the street were iron gates that welcomed us to Tijuana. That seemed like a bit of a contradiction, but we went with it. After all, what’s the worst that could happen by walking through lockable iron gates in a foreign country that is currently having a kidnapping epidemic when you are coming from a country with a leader that is calling everyone in this country rapists?

This place looked bad. It wasn’t just that it was completely dead. Everything here was abandoned. These buildings looked fairly recent, but a few were burned out, and the rest looked boarded up. Not just Monday Morning Closed, but closed closed. We went around until we found a sign pointing to the downtown. We turned in the direction that it pointed, then the location snapped in my head.

We were in the old crossing Plaza. When I had been here before, the crossing had exited directly into this plaza. The place was always filled to the brim with vendors and restaurants. Now there was literally nothing. We went up the the bridge that crossed the river here, and found one working restaurant. There were vendor stands that were probably open on the weekends, but even with that, this was a far cry from what I remembered.

I checked later, with the new border crossing the traffic change hit the businesses here with an 80% drop in business. It pretty much killed the plaza.

We crossed the bridge over the river, and the city started to come alive. Vendors were out, there were flags fluttering across the street. Stray dogs were running around, and Sasha wanted to adopt them all. The arch at the top of the hill was apparently the main plaza on Avenida Revolucion, so we headed that direction. As we got to the arch, we could see the corresponding taxi stand to the one at the crossing. This explained a lot why the old plaza was dead. 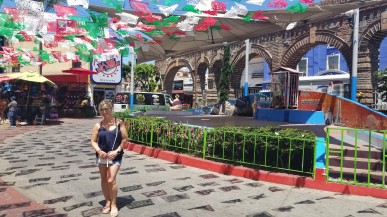 Street vendors were out in force, so we skipped the plaza at first, and just decided to walk the street for a bit. Tijuana has a reputation as a pretty bad party area. I could see this on a Saturday night, but this was a weekday, so everyone was pretty mellow and friendly. I tried to pay less attention to the carnival barkers selling me junk, and more to the city.

This place needed a paint job. But it wasn’t an unattractive city. In contrast. Tijuana has a lot of really nice architecture that is buried in neglect. There was a lot of construction coming in that we bringing the next greatest bar or club. But ignoring that, I could see old theater fronts, classic restaurants, and historical buildings underneath the modern calls for Americans to come and drink til they passed out.

Speaking of passing out, Yulia and Sasha are asleep, so I’ve moved to the hotel bar.  New bartender on deck. Good to see. 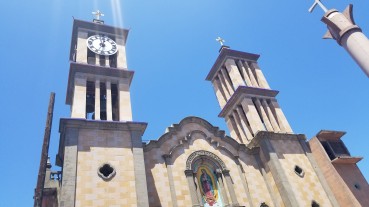 We walked a few blocks off the main street to the Catedral De Nuestra. It was a beautiful church, the stations of the cross were on the columns, and it was fully active on a midday Monday. I wonder if any tourists come out here at all. We walked around the area. There were some amazing fruit stands – Mexico has always had amazing fruit when we have visited. Typical with the neglect was the fact that a significant majority of the street utility covers were broken or missing. I’ve always had a fear of stepping on street covers. Here it is a valid concern.

In a few areas there were signs of remodels pending or new buildings going in. A few of these were attached to old facades, so if there are preserving some of the old street character, that’s great. But I could see that some of these were already replaced with modern glass structures. It’s hard to keep that away.

We were hungry at this point, so we went over to a sports bar that Sasha picked out. It was on the second floor, and had some better views. Once we went up the stairs, I was pleased to find that the World Cup was on. I really only follow the Sounders and Arsenal, but if I can catch a match (did you see that ludicrous display last night?) I’m more than happy to follow along.

The margaritas here were fantastic. We had a view of the main street, and the World cup playing on screens behind us. Sasha was quite pleased to be able to order a Pina Colada, and be legal. Yulia got a house Margarita, and I tried a Tamarind margarita. All were excellent. We grabbed some lunch, and stayed to watch Belgium brutally upset Japan. There were screams and tears. I nearly had an emotion.

Looking over the street, I thought how much this could be a really beautiful city if there was the economy to do so. You can look at a city like Detroit and see the decay and feel like nothing could ever be done, but really it’s just about the economy. A huge city like Detroit is a much bigger problem than something like TJ. Maybe in the future a different border policy will change things. but that’s not now. And it’s a shame.

We walked back through the town, past the vendors and flags fluttering. Sasha stopped to take time to feed and play with a street puppy. Sasha attracts animals. They played for a while. There were tears. I nearly had an emotion.

We went back thought the Plaza graveyard and waiting in the wrong line at the crossing. We could have gone through the “fast” lane because we had passports, but of course nothing was labeled, so we were laughed at by the really bored border guard.  Glad we made his day. We made it across with zero issues.

Back across, we walked over to the outlet mall by the border. I’m still not sure who this is for. If you did a lot of shopping in Mexico, this is redundant. If you are from Mexico, this is ll too expensive. Whatever. I got some t shirts on sale, and Yulia and Sasha found some clothes as well. We really did pack light this trip, and this was a good chance to pick up what we forgot.

Last call here.  My Bartender Ion has let me stay overtime so I don’t have to write this outside on the deck.

Back at the Resort we were planning to leave tomorrow. We are going to change plans and spend a day up in Oceanside. We had drinks on the restaurant deck and watched the sun go down. It’s a nice way to end the day on vacation. We should do it more often.

Then my phone started beeping and notified me that there is an impending heat wave coming. Temps up to 108 while we are in Disneyland. Where are my rain god powers now?