We got an early start today. We were out of the hotel and on the shuttle by 830. most days we couldn’t get out before 9:45 or so, so this was a real improvement. We dropped off Oscar and took the horse-drawn trolley into the park. Another ride checked off the list. We headed over to the Buzz Lightyear blasters, and then to breakfast. While Yulia was getting food, I went to grab Autopia fastpasses. I ran back and we sat to eat in the Tomorrowland Terrace. The terrace is apparently the home of some hyper-courageous small birds, as we and the other diners were beset by a whole swarm of them who started with a cure landing on the chairs, then the table, then they would swoop your plate and steal food. if I stuck my finger out, they would bite it. Alfred Hitchcock had nothing on these birds.

We made our escape and headed over to the cars at Autopia. Sasha was excited because she was finally tall enough to drive the car on her own. She still wanted Yulia to ride with her, but it was still a milestone. We went for two rounds, and Sasha’s only real problem was that the pedal spring was really hard to hold down for someone her size.

Small world has been redone with new boats, everything repainted, and they have now added Disney character dolls into the lands where their story comes from. It’s pretty nice. and on a hot day the air conditioning is great. As we exited we went through the gift shop, and the cast member at the cash register told us about the ‘”hidden mickey” pins. Sasha has been collecting and trading pins for several years, and this is the first we have heard of them. You can buy any of the normal pins in the various gift shops, including cheap packs that are good to trade with cast members for more expensive pins, but the special ‘”hidden mickey” pins are given only to cast members, who can trade them if they like. Sasha has started looking for these, and has also been looking for the “black and white” Mickey pins, She got one from Steamboat Willie, but they don’t seem to have done a lot in that style. The pin trading is actually a pretty cool activity, I got several for my shoulder bag as well. 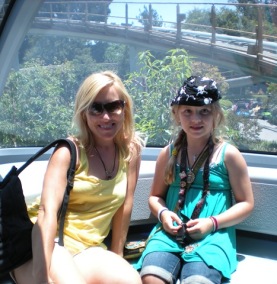 We took the Monorail out of the park, and got to ride in front with the driver. Most people don’t know but they only let you up front if you ask. We went to lunch at the Napoli pizza express in Downtown Disney. The little Express versions of the big restaurants are the real value for dining, they have a smaller menu, but the prices are better and they are way faster. The pizza was really good too. Not the gooey kind you usually get, but thin and crisp. Fresh salads as well. Only the wine was lowsy, but oh well.

We spent the rest of the day at the hotel pool. It was really hot, and the evening felt like it was just getting hotter, not cooling off. I think winds were coming in from the desert or something. Pretty much we just spent the rest of the day in the shade. It turns out that our hotel has some european travel deal going on, and the vast majority of people here are from outside the US. I’d say half of them are British.  We met a very nice Norwegian family when the dad walked up to Oscar on all fours to play with him. Despite the odd introduction, they were very interesting to talk to. They spent the 4th in New York, seeing fireworks over the Statue of Liberty. They didn’t have solid travel plans, and weren’t sure what to see here.

We gave them some general advice, they were planning to drive to San Francisco, and then to Las Vegas the next day. I informed them that that drive was much longer than it looked on the map, the size of California is deceptive. They eventually decided on a few days at Disneyland, then a few at Las Vegas. We told them which hotels had the cool family things, like the sharks and Mandalay Bay and the tigers at Mirage. Eventually we grabbed a glass of wine and some dessert, and went out on the patio to rest. We were going to stay up for the fireworks, but were tired, and went to the room.

It just kept getting hotter at night. I eventually cranked the AC up all the way to no avail. So much for using our Magic Morning for our last day.