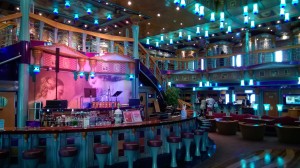 The cruise ship terminal was a freaking goat rodeo.

The terminal was easy to find, it was right across the water from our hotel. But once you got close the signage was unclear at best, and just plain wrong in areas. Guys in orange vests were waving sticks and pointing to tell us were to go. We thought we would be early, but everything was already packed. A guy waved us away from the parking garage, and over to a makeshift baggage drop-off. I left Yulia and Sasha there to watch the bags, and pulled out of the drop-off. The ramp up into the garage wasn’t marked, but after a loop I guessed right and got in the right lane.

The garage was completely full. I circled until I found someone departing the ship, and took their spot. When I got back down to Yulia and Sasha they were trying to figure out where to head next, and we had no damn idea. A porter came up, and pointed us in the right direction while he offered to take our bags. I had already printed our room labels, so this worked out great. We tipped him, and started to work our way into the crowd. The terminal itself was still closed, we were out in the courtyard. Nothing was marked as far as we could tell. I saw a huge group waiting for sunglasses on one side of the courtyard, and other people milling about near the doors. There were waiting areas marked “A”, “B”, etc., but no indication of where we were supposed to go.

We wandered over to the Sunglasses line, and found someone with a clipboard and Cruise line shirt. Apparently this as the check in line, it was just near the sunglasses booth so you couldn’t see the desks past the lines. That made mores sense. The line was pretty big, and slow. Once we had waited for a bit, we looked back, and the line was enormous. Apparently, we just missed the big rush.

Once we got checked in, they let us through the terminal, which had another full group of checking desks that weren’t being used for some reason. The terminal is a big, white half-dome on the shore, very impressive from the outside. On the inside, it’s mostly empty. As we went up the stairs to the boarding ramp, you could look across the whole place, and literally there e was a wall chopping the floor in half. The second half had nothing in it from what we could tell. It made no sense, but since there wasn’t a bar here, I wasn’t interested in sticking around.

We had our obligatory picture with a ship’s wheel taken, and walked up the ramp onboard. The ship is goddamn huge.

An atrium stretched from deck 2 through the top of the ship, 10 decks up. The whole place is in a “Fiction” theme, with characters from famous stories on the walls, and each area having a theme. The Main Restaurant is Horatio Hornblower. The Stage is Phantom of the opera. There’s a “Raven” library, etc. 2 pools, a spa, an uncountable number of bars.

Our cabin is in the aft, with a deck over the stern. We watched as they pulled the lines in, and the thrusters pushed us away from the dock. Once underway, we stood out on our deck and watched the wake of the ship curl out of sight.