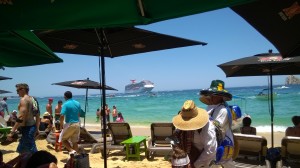 We headed down to breakfast after walking up. All our shore gear was ready in the room. We had tours planned in the other two stops on this cruise, but we saved  Cabo for a day at the beach. As we looked out from our table at breakfast we could see dolphins jumping in the ships wake. They did this for a solid 15 minutes before we rounded the bend into the Cabo Harbor. When you see something like that, it’s hard to look away. These are some amazing animals, and it is different to see them in the wild instead of in a tank. We kept looking out at the waves even after they were gone.

We have been to Cabo enough times now that we can find our way around without too much trouble, our only worry was that the place had been hit with a storm last year, and we weren’t sure if the places we liked were damaged. As it turned out, when we took the tender into the marina from the ship, we saw the worst of the damage. The old fish packing plant, which was already in a state of disrepair, was collapsed in the middle. Lots of the docks in the marina were new, and we could see old docks tied up in piles, they had obviously been torn loose in the big storm. But once in town, everything looked normal. Likely those repairs were faster than rebuilding the marina. Lots of boat slips were empty compared to the last time we were here. I wouldn’t be surprised if a lot of boats were damaged as well.

We walked the edge of the marina and were accosted by the usual suspects – fishing guides, glass bottom boat tours, water taxis, etc. We were as friendly as we could be, but kept walking past. It was really hot. There isn’t an awful lot of shade on the marina walk, so we set our first stop at a small plaza we knew that had some good shops and a Starbucks. We really didn’t want coffee, but they had WiFi so we could post a picture or two and check mail.

Our next stop was a flea market in the neighborhood behind Cabo Wabo. We hit this market last time, and Yulia knew the stall of some silver sellers that had some pretty good bracelets and such. Yulia used to live in Turkey, so any chance for full on bargaining was welcome. She haggled with the vendor for a while, and we walked away with a nice silver bracelet and a spiral ring. They weren’t super cheap, but pretty fair prices. So it was a good deal all round.

We started walking around the bay, took a shortcut (read as: air conditioning) through the mall at the end of the marina, and went over the hill to Mango Deck. This constituted the remainder of our plan for the day, aside from ordering drinks. Mango Deck is a tourist party bar with a great beach and reasonable drinks. It also has a lot of shady umbrellas – this was critical.

I sat down and immediately ordered a bucket of Dos Equis. Yulia had a Margarita, and Sasha had a Virgin Pina Colada. They went to swim, I sat on my ass. Mango Deck also has an excellent kitchen, we asked the waiter what was freshest, and had some terrific tacos, guacamole, and ceviche. The girls returned from their swim, and we watched the drunken college students go through a beer drinking contest against the staff (the staff won), and then the obligatory booty shakin’ contest. All the hot girls came up, but most of them moved like the Tin Man with fake boobs. They brought some guy up as a judge, sprayed him with beer, and after much booty review, he settled down to two. It came down to a skinny Latino girl (now available with Shakira hips!), and an older heavier woman. She came up as a joke, but she could actually dance and shake. Of course, lots of parts kept shaking after she stopped dancing, so she may have had an unfair advantage. The crowd broke the tie in favor of the skinny girl, and everyone drank.

Yulia grabbed a vendor off the beach and we had two fresh mangos on a stick. These were insanely fresh and ripe. You simply can’t get tropical fruit like that in Seattle. Eventually, I hit the bottom of my bucket of beer, and we started walking back up the beach, and not as straight a line as we came.

By the time we got back to the tender, we realized that Local time and Boat time were different. We were an hour early. Dammit. We got on and headed back anyways. We would get our clocks straight so we didn’t make this mistake in Mazatlan.