We lounged around Anya’s house for a while in the morning. Roger made some amazing Espresso. For as long as we’ve known him, Roger has made espresso a major hobby. He has always had a plumbed-in machine of top quality, the best grinder and fantastic beans. Some people bake, others BBQ – Roger is an Espresso Master. Eventually we were caffeinated enough to pack up and hit the road.

It’s only about an hour to get to Disney from their house. It’s a nice to break up all the driving. We hit Anaheim early and stopped for a late breakfast. We went to Tiffy’s. It’s a place that has been across from Disney since it opened in 1955. This place always has a great, simple breakfast, and it’s cheap compared to the rest of the neighborhood. It’s also right next door to the Anabel Hotel, where we have stayed before. Sadly, the Anabel is gone. It’s a construction site at this point, another big place coming in soon.

There was construction all over Anaheim. A whole new walking mall opened across from Disney, and a few new hotels had appeared as well. We went through the Disney entry streets and pulled up the the entry for the Disneyland Hotel. Say what you want, but Disney really knows how to put on a show. Checking into the hotel is  really made easy. You pull up, there’s lots of check in parking. Everything makes sense. We were a bit early to check in, but they had everything already put together. We had pre-booked a full package, so they handed me the trip packet with our passes, setup the room, and got us the keys. We were lucky to get into the main tower. The room was actually bigger than our resort room back in San Diego. Disney is notorious for small rooms, but this was fantastic. We had a nice view out the front (mostly trees, but a small corner of the park as well.) It took a bit of looking, but I realized we could see the Star Wars land under construction as well. That looks amazing. 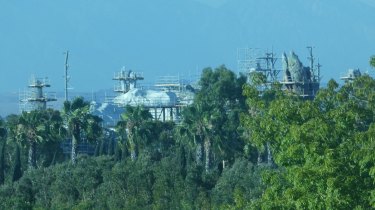 Once we unpacked and I dropped off the rental car, We decided to get in some time in the park. The weather was getting hot, we knew we had the heat wave coming, but we thought that it wouldn’t be too bad. Walking towards the gate, we noticed that the Downtown Disney plaza we under a lot of construction. House of Blues was totally gone (it moved to the local Mall) and the full end by the hotel was shut down. Around the middle of the plaza we could see that A few places had new facades, and signs were up showing what was coming. Yulia commented that the old place really did have a “90’s Future” look to it, and they were going back to a “50’s Future look” For some reason the future is always defined as being from one era or another. I think most folks don’t want to admit that the actual future is now, but with shittier internet.

Even the walk to the park was hot. It was in the 90’s. We didn’t think it would impact us so much, but it wore us down right away. Partially because we have been in cool San Diego, our bodies aren’t set to deal with the heat so fast. We got a couple of rides in, then we just wore out. We wanted to take the monorail back to the hotel, but it was shut down due to heat. That was a great sign. We walked back to clean up and rest until things cooled down.

Once the temp was back into the 80’s, we walked back to the park and got in a few rides. Lines were shorter as the shows were starting. The sun was going down, so things were a lot cooler. We rode the Matterhorn as the sun set, which is pretty cool. We went through the park a bit and found that Indiana Jones was pretty much empty. The look of the ride at night in the heat really gives a tropical feel that is pretty amazing. We got out and headed back to the room, as our plan was to get up early to beat the heat.

Naturally, we totally failed to get up early.

I’m not sure how many times we’ve been to Disneyland. (Seriously, we talked about this, and we’ve just lost track. If we are in California for something else, we try to swing by. There’s something seriously wrong with us) But we almost never get up early enough to take advantage of the Disney early hour. This was no exception.

We altered our get up super early plan, into a let’s just get out of the park as it got hot. That was more reasonable. We made it out of the hotel to find that the Monorail was working. I love going into the park via monorail, and it turned out to be smart as well as the gate was full of crowds, and we missed that all. Crowds were light. We were surprised. We also found that there was a new app that allowed you to buy a digital fastpass, this was amazing. We could reserve fastpasses right from the phone (which meant in the shade). We laid out out path through the park, hitting rides and watching the temps rise. We thought we would get chased out around 10:30, but we made it to 12:30 before we has to leave due to heat. We were in the high 90’s.

We wanted to take the monorail back, but it was already down. Not a great sign. It was a hot walk all the way back. We planned to spend the afternoon at the pool staying cool. Apparently, so did everyone else. We had changed and gone to the pool, but there wasn’t a lot of space. Worse, it was still getting hotter. We found a chair to drop our stuff, and went to jump in the pool. I was burning my feet on the concrete running the short distance to the pool. We jumped in and it was still hot.

We kept to the shade while in the pool and things were fairly comfortable. That was great for a while, and once we cooled down I found some lounges in the shade and we tried to just relax. That didn’t last long, as the temperature just kept going up. People were leaving. Somewhere around 113 degrees, we abandoned the pool. The concrete was burning my feet as I put my sandals on, and I burned my hand on the pushbar as we exited the pool area. The air was thick and truly oppressive.

We went right over to Trader Sam’s tiki bar.

It was already busy, lots of other people had the same idea. But it was air conditioned. They had drinks and wings as well, so that’s a bonus. The tiki bar was full with folks standing on the sides for a seat. Everyone was ordering water before anything else. Only then they were ordering drinks. Normally the bar expects most people to sit out on the patio, and that’s how they handle overload. But today this was less of a bar than a Lifeboat.

Yulia talked to one of the staff, and found out that something like five ambulances had been sent over to the park to take out people who collapsed from heat exhaustion. We weren’t surprised. We got out early, and we still felt overheated. If we had waited even an extra hour, it would have been a mess. Everyone in the tiki bar was talking about the heat. This was puncuated but the special effects in the bar going off. Trader Sams is special as it is themed after the Jungle Cruise in Disneyland. That also means that some of the drinks come with effects. The Shipwreck was popular as they just got a new set of tiki mugs for the drink. So everyone who ordered the drink got the bell-ringing call to “Swim for your Lives!” then lightning and thunder would go off. Then the bartenders would use squirt bottles to make “rain”. That was pretty popular. I just wanted beer.

We later heard that the day peaked at 116 degrees for us. I smoke fish at that temperature.

Every once in a while, we would step out the door to test the heat. It never seemed to cool down while we were there. The door handle to the bar was in the shade, but hot to the touch. It was crazy. We had plans to originally head back to the park when things cooled down, but it just never cooled down. We ate a late lunch, then walked across the broiling pavement to our tower and just went up to our room.

They napped. I wrote. You read.

Once the sun was down, we went out to see how things were. It was 8:30. And it was still really hot. but it was close to 90 degrees now, and that’s actually manageable. We didn’t go back to the park, but we walked around the hotel a bit. The patio around the Tiki bar was full. Once it was cool enough to sit out the deck apparently that turned into the popular destination. We went to the lobby bar to get a late snack and drink with air conditioning. Then we were done.

I think we got lucky to not get seriously sick with this heat, or worse. Usually I’m the one who gets sick from the heat on vacation. It’s happened several times. We all feel worn out by the heat, but not sick. Vacation or not – the weather doesn’t care.

Tomorrow should be about 20 degrees cooler. Still too hot but a lot less dangerous. Aloha. 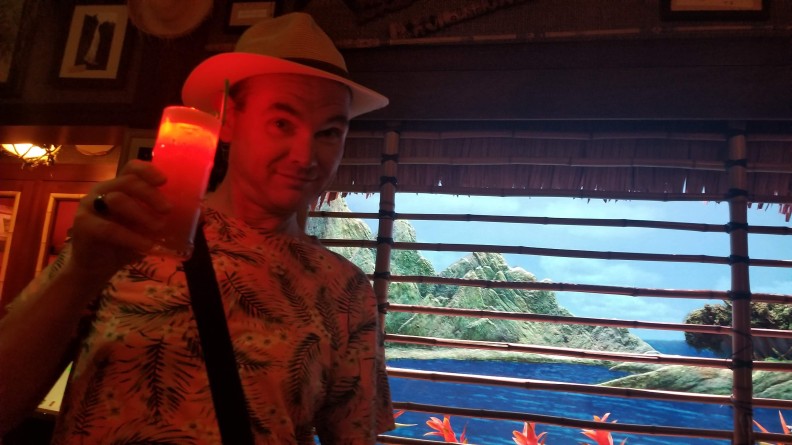