We overslept. Probably necessary with all the walking, heat and everything. Yulia got up first to swim, she had the whole pool to herself. Then the cats came out to keep her company. She texted me and I came down as well. 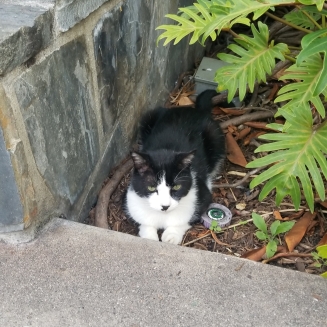 Disney has feral cats that run around the park and hotel grounds. They feeds and take care of the cats, and in turn, the cats take care of rats and mice. Not a bad deal. If you are paying attention you will see one sometimes. I grabbed some coffee, and there were three of them all hanging out with Yulia by the pool. They didn’t get too close, but kept an eye  on us just in case we brought some mice.

We stayed a long time at the pool in the morning, then went up and chased Sasha out of bet. It was already past 10. We didn’t rush as we thought Monday should be a lighter day for crowds, and it was enjoyable to take our time for a change. We walked through the Disney Downtown and picked us some smoothies for breakfast. We got to the ticket plaza and it was packed. Literally, the line going into Disneyland stretched halfway across the plaza. We should have taken the Monorail in, but choose poorly. The sun was cooking us in no time.

Once inside we went into the Disney Main Street Theater to cool off. There are actually some cool exhibits in the theater lobby. We were barely standing, but we watched a whole video from Steve Martin from the 50th anniversary. It was a whole review of how the park was originally built. It was great. The photos and videos of the original park creation are just great, and I can’t resist watching architecture put together. Next to that were models and details about all the Disney Train engines and cars. Some of the Disney trans are built for the park, others were antique and rebuilt. The park even has a special coach car, and used to have a pullman as well. Walt was a bit of a train nut.

In the end, the smoothies didn’t mix well with the heat, and I got an emergency call from work. We decided to head back to the room to wait out the crowds. I also had to finish this work call. Nothing like work cutting into the middle of vacation.  On the way back, we passed the a fountain at one of the closed restaurants that are under renovation. Circling the fountain and crying was a baby duckling. The mom and other ducklings were in the fountain, and the little duck couldn’t jump up back into the fountain. It was stuck out on the hot concrete. No one was helping so we scooped the baby duck up and got him back into the fountain. He swam right back to his mom and all was good. I guess out heat exhaustion was good for something. We headed back into the hotel.

I had a car rented for the next day, so we decided to check out a restaurant outside the park. When I dropped off the first rental car, I saw that a new mall popped up, and House of Blues was in it. It used to be in the Downtown Disney, but I never knew it moved. The new mall is called the Anaheim GardenWalk, so it was worth checking out.

It was mostly empty.

There were some really nice anchor restaurants, but most of the place was brand new and empty. So that cut the tour a bit short. But House of Blues was here, and open. The menu now matched the House of Blues in Chicago (hint: big improvement) so we went in for lunch. It’s a better venue. They have a stage in the main area, an full concert venue, and just some great music playing without a band. (can’t beat the blues). We had some drinks and a late lunch. The menu is a Cajun fusion, so anything with shrimp is good. We took our time. No shows to see this week, but it’s a better space. It was good to eat outside the resort.

As soon as we stepped outside, it rained a bit. I cheered and proclaimed my power as a rain god – fists in the air! Then it stopped. shit. On the bright side, even a little rain did bring the temperature down a lot. Once we got back we went back into the park. We set up fastpasses for just a few big rides. It was much better in the evening.

Sasha and I Went to use our passes on the Guardians of the Galaxy. This used to be the Tower of Terror, but it’s been re-themed. They did a great job. Rocket Raccoon runs around in the line area setting up the theme. In the ride they added video segments of the “escape” that you are “helping” with by bouncing all over hell after eating a Cajun burger and beer. Great effects.

Yulia, instead, went to see the Frozen stage show. She had no interst in the heavy rides. I was glad she went, but annoyed as I TOTALLY WANTED ALL OF US TO SEE THIS AND NO ONE LISTENED. This totally doesn’t bother me. At all. Really. Yulia came out amazed at the whole production. Apparently they had anamatronics with the actors, and the backstage was a 3-D effect like Soaring. It even snowed on the audience. I’ll have to take her word for it. 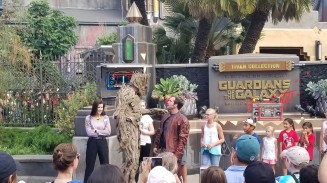 Sasha and I hung around waiting for Yulia to finish with the show and saw the big GoTG Dance Off. It was actually cool. Star Lord and Groot came out and all the little kids were dancing with them. Honestly, I love that stuff. It was good music and super cute.

We caught the last runs on Cars and the Incredicoaster. We actually used the Single Rider line for Cars, and it was crazy faster than the full wait. Incredicoaster had huge lines, and even with a fastpass the line went up the pier. But it was still worth the wait. We capped off the day with Sasha and I winning stuffed animals at the carnival games. The joy is not just winning, but taking them away from other children. You need to teach values to the next generation.

Back in the room, we got some food and drinks and stayed in. We were tired. It was great to just stay in and rest. As it turns out, we had a great view of the fireworks out of our window. We turned the TV to the Fireworks music channel (yes, that’s a Disney thing) and watched the whole display from our floor.

It was awesome. But I still wanted to see Frozen. I should let it go.

One Reply to “Run Mickey!”